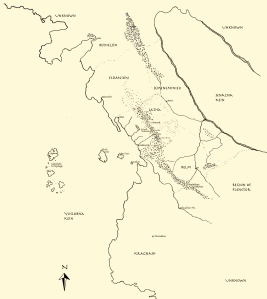 Map of Knownearth, the setting of Amanda’s first novel, Blade of Amber, and its reboot version, A Wizard’s Forge.

As regular readers know, the One Year of Letters contributors have been commemorating the first anniversary of this blog by reflecting on our lives and work over the past year. Ever-gracious Kerry expressed her enthusiasm for the OYOL team’s introspections and observations. Elaina heroically looked back at her demons and once again stared them down. Colleen analyzed trends in our work and explored where this blog might go in the future. And our resident Picasso of words, Sigurd, took us on another journey through his thoughts and memories, each of which is a treasure. And Mary and Tatyana will be posting their one-year reflections soon, so be sure to come back for their wisdom and and insights.

The past week, I’ve looked over my old posts to prepare this blog but also because a client wanted some writing samples that were “light, warm, and witty.” A few of my blogs have been light (running toilets and wasps), and I’ve certainly tried to be witty, although only the OYOL readers can say whether I’ve succeeded. I do get preachy—themes of procrastination and social justice prevail in my blogs. Yet the preaching, to either myself or the world, doesn’t seem to have had much impact. The world is still screwed up, and I still spend too much time Web surfing or playing games on my phone. These things—particularly my own failures to live up to my potential—have prompted questions about the value of my work (much as Sigurd did earlier this week). By work, I mean my fiction, of course.

I released my first indie novel almost three years ago. In the 1990s, an agent shopped that novel to the major publishers, all of whom rejected it. The agent and I parted ways, and I quietly finished the sequel, laboring in obscurity and solitude. Occasionally I’d share my vocation with friends, whispering as if it were a shameful secret: I write fiction. (The shamed whispering, by the way, is one of the good girl bad habits Kristin Lamb recently called out.) Some of these confidants would ask to read the book, which I happily delivered. Then, crickets. No one ever provided feedback (except my then-boyfriend, now-husband). Since I was raised to say nothing if you have nothing good to say, I figured everyone hated it. I had tried to write something daring and different, a scifi-fantasy blend about a young woman who overcomes enslavement and sexual abuse to become a warrior and a wizard. The book seemed too good to be a trunk novel, and I thought myself a better writer than most authors I found on bookstore shelves. Yet all those publishers’ rejections and my friends’ silence convinced me my opinion had to be wrong.

I eventually shouldered past this crisis of confidence and decided to join the indie publishing revolution. Since then, the validation of positive reviews has carried me high, and dismal sales have pulled me low. I decided to reboot the system: fix the book’s bugs and relaunch it as scifi fantasy badass female hero 2.0 (now entitled A Wizard’s Forge; targeted for a 2016 release). The new version is 55,000 words leaner and quite a lot meaner. To figure out how I could improve my book sales, I attended a publishing conference last spring, and there I met with an agent, who asked to see the reboot manuscript. Then, crickets for four months. Once again, silence birthed doubt. Doubt led to sadness, sadness to too many hours playing games instead of writing, reading, or taking care of domestic chores.

What does all this have to do with my reflections on the past year of OYOL? For one, these events were occurring behind the scenes while I wrote biweekly posts about transgender locker room usage and bad birthday parties at roller rinks. Today, on the day I sat down to spill these beans, I finally received word from the agent, and the answer is “no.”

But I’m OK with that. About a week ago, just after I finished a game of Spider Solitaire and as I stared at my messy desk and remembered my dirty bathroom and the rug covered with lint and litter, I thought, you have the power to change your life. You just have to slip off this track, scoot through this little patch of trees, and go down that other route. The past six months I’ve been waiting for a guide through these woods, and today I learned that person decided to lead someone else. It’s disappointing news, but it’s a relief too. I’ve had a map in my pocket, one I’ve been itching to open up and examine. It just might be the thing I need to help me find the next bend. Time to get going.

This entry was posted in Amanda and tagged #journey, #overcomingfailure, amwriting, aspirations. Bookmark the permalink.