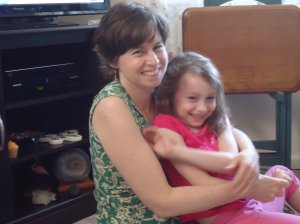 The last time I cried at a birthday party was when I was nine or ten. A friend invited a dozen or so girls to a roller rink, and I was the only one who’d never skated before. Game to try, I giggled with the other girls as we shuffled across the thin carpeting of the shoe-changing area. The friction slowed down the skate wheels, providing me with a false sense of “this is easy!” Then I stepped onto the rink. The skates whizzed over the glass-smooth concrete but failed to bring me along and I fell splat onto my rear. I struggled up and slipped slowly around the rink, clinging to the wall. I don’t remember how many circuits I hugged that wall—I probably struggled through at least two before giving up. I spent most of the party sitting by myself, quietly weeping while everyone else rolled past, having fun. As the icing on the bad birthday party cake, the birthday girl’s mother scolded me for crying and ruining the party (my young brain logged the mother’s behavior under the category “things not to do when you’re a grown-up”).

A window opened on this memory when my nine-year-old daughter shed her own tears at a recent skating party. Like me, she doesn’t easily master wheeled conveyances. Still, when we arrived at the party, she happily donned her skates, excited because this particular rink offers wheeled “walkers” for novice skaters, which many children were using, so she felt no shame needing one. Yet when she started toward the rink, girls descended on her like a flock of hungry pigeons. Every friend meant well as they urged her to hurry so they could skate together, but it was too much pressure. Eyes wet, my daughter backed away and begged to go home. We took off her skates and sat and breathed. As fortune would have it, another friend had fallen and hurt herself, so my girl had someone to sit with until pizza time. After their second cupcakes, both girls felt better. They put their skates back on, grabbed their wheeled walkers, and scooted slowly around the rink, all smiles.

When I was in junior high, I took roller-skating lessons and by the last session could at least skate unaided. The lessons came too late for any skating parties (I think my friends had outgrown them by then), but I learned that I could learn to do the “impossible.” Until very recently, I watched my daughter shrink from physical challenges the same way I did. She used to quit too soon, before giving herself time to overcome fears and master technique. I know that pain: I used to equate frustration with failure, especially when all my friends seemed to have the natural ability I lacked. Like me, my daughter is further handicapped by her parents, who lack teaching skills, patience, and time to help her learn and practice. Another skating party is coming up in a couple weeks, and I’m dreading it for her sake. On the other hand, the outcome of the last party proved while my daughter is like me, she is not me. She did not sit alone and cry last time. Eventually, she tried, and she did. I think there’s a lesson there for me.