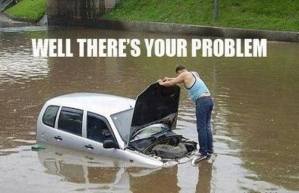 Imagine a road-weary traveler mere miles from home whose car breaks. When she shimmies underneath, she sees something broken, dangling, and dripping fluid. She pushes from beneath the car, feeling as though its weight crushes her chest. Her children – there are three with her, and their dog – whine about the heat even as she wipes sweat from her pre-menopausal brow.

No signal for her cell phone, since the road upon which they are stranded is rural and deserted. No houses nearby and the nearest sparks of civilization wait about a mile and a half from where the car rests, engine ticking as though in apology. She collects her elder daughter’s crutches, grabs the service dog’s leash, takes the six year old’s hand, and beckons to the recalcitrant teenager who manages to roll her eyes in a perfect imitation of Disgust from Disney’s movie “Inside Out.”

“Great,” Sweet Sixteen grumbles, “I wanted to get home to finally rest. Why does this stuff always happen to us?”

The mother’s thoughts echo her sixteen year old’s. Why, indeed, do such strange hardships visit them? Inner turmoil threatens to bubble over, but instead, she pastes on a smile and encourages her brood. Her cheerful, “This is an adventure, isn’t it?” is met by a disgusted, “You have a weird definition of adventure, Mother.”

Perhaps, but adventure is something out of the ordinary. It is an exploration ignored by others. It is the path a hero treads despite an overwhelming desire to give up. It is facing adversity, for it is through such tempering our mettle is tested.

Throughout history, heroes faced challenges, overcame their insecurities, and bested even the most difficult of situations. Abraham Lincoln lost children, battled depression, and watched his wife slip into illness while guiding the United States toward emancipation. JK Rowling said she was rejected “loads of times” before her Harry Potter series was accepted; a divorced mum living on little, living in an unsatisfactory flat in England, pushed through her trials to triumph. Olympian Gabby Douglas faces criticism of everything from her hair to her nervous omission, yet her gymnastic performances remain spectacular.

Teachers impress upon their students the importance of a good story arc. The protagonist must face adversity, or there is no story worth reading. None consider the toll taken on fictional characters because in the end, the tale is defined by how tension is handled.

Every person trudges through difficult patches, times when everything heaps atop, and we feel like an Incredible Hulk threatens to rip through our mild-mannered composure. Still, we must be the heroes of our own stories. We are the protagonists striving toward our goals.

We might make it home after an unhappy misadventure with a broken car to find a past-due notice in the mail and a broken refrigerator stocked with spoiled food. We may need to forgo vacations and back to school shopping AGAIN this year to catch up on bills. We might even want to throttle a smug little Fate who seems to relish our trials and tribulations, if only we could find the little sucker somewhere, personified.

Here’s the thing, though. Every day is an adventure, and it is up to us to make the best of every situation, no matter how zany or improbable, how frustrating or distracting. Ultimately, life is short, and we need to focus on what matters. Faith. Family. Our dreams. And hope that all will turn out as a grand example of perseverance and love.

This entry was posted in Kerry and tagged adventure, facing adversity, hardship, heroes and heroines, life, perseverance. Bookmark the permalink.