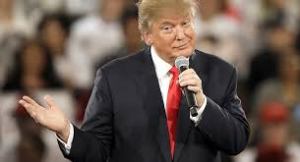 Because He Has Big Balls? – Elaina Portugal

I typically stay out of the political arena when it comes to OYOL, but this Presidential campaign has me scratching my head wondering about where we are going as a nation. I posted to my Facebook timeline the article about Trump refusing to do the debate because Fox would not replace Megyn Kelly as moderator. A friend of a friend replied that he was voting for Trump because Trump has big balls. I needed a second to absorb that comment. He was going to vote for Trump because Trump has big balls. Now I understand he didn’t mean that literally, (insert Sarah Palin joke) but the phrasing of that comment alone was enough to tell me that there was a reason he was a friend of a friend, and not my friend.

As the conversation went on between others on the thread, it was pointed out that if Trump had such big balls, he wouldn’t run away from Megyn Kelly. It was also pointed out that refusing to engage isn’t an option when dealing with other countries. This person came back on the thread and said Trump wouldn’t be dealing with other countries. He’d be too busy making America great again. Yes, I needed a moment to absorb the ignorance of that comment too.  We’ll just ignore North Korea and Iran as they make nuclear warheads. We’ll ignore Syria and the growing threat of ISIS, because you know, Trump’s big balls will be staying at home ignoring the growing threats.

Sarcasm aside, what the hell is going on? First, let me be clear, I do not know who I am voting for in this election. While I like Bernie Sanders and I think the world needs him, I’m not sure he would be any more effective as our leader than Obama has been. Congress will fight him tooth and nail and this country needs a leader who will bring the parties together, not divide them even more. I don’t know who’s getting my vote yet, but it sure as hell won’t be Trump.

Have you seen the video of the British Parliament discussing him? It’s embarrassing and these are our allies! Trump spews hate, misogyny, xenophobia, sexism, and to say one wants him as President of this nation because he has big balls? It doesn’t take big balls to belittle people. It doesn’t take big balls to bully and threaten. And it absolutely does not take big balls to run away from a debate because you think the moderator will be unfair. Extrapolate that behavior. Is he going to refuse to speak to Putin because he thinks Putin is going to be biased? Yeah, take a second to let that thought absorb. Of course Putin’s going to be biased.

I am befuddled. I do not understand the Republicans’ love of this man. What worries me is that so many seem to identify with his messages of hate and intolerance. Is that who we’ve become as a nation? He who bullies and belittles the most gets our vote? Are the majority of Americans really that racist and hate filled? Or are we just scared and want to hide behind the bully we think has the biggest balls?

I’d like to think we were smarter and braver than that.