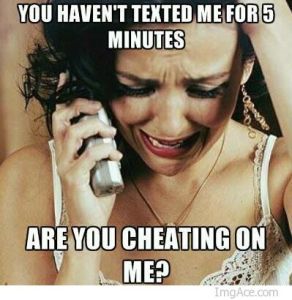 This morning on the way to school, you and the boys heard a radio bit about a woman asking for advice. Apparently, her dentist is good looking and her  husband overheard her and her sister talking about this. She described her husband as “getting all puffed up” and he demanded she change dentists. She thought it a ridiculous request, but wanted to get a consensus from the audience. Before the radio show host took any callers, you lowered the volume to talk to your boys about this and see what they thought. Your twelve year old thought the man was stupid and insecure and needed to get a life. Your fourteen year old said, “Guy’s got issues.” You did an internal self-congratulatory dance, knowing full well your boys have never been in love and have never felt the bite of the green-eyed monster. However, you felt a modicum of relief and pride knowing this was their initial response.

After you dropped them off, you turned the volume back up to hear others’ responses. The show had morphed into people calling in and talking about their experiences with unreasonable requests from partners. One gentleman called in and said his ex-girlfriend would not let him look at waitresses when he was ordering food. He could not make eye contact with female bartenders and had to either look at his menu or her, not the waitress/bartender. Another gentleman called in to tell the story of how he and his father went to a baseball game, his dad’s first in over twenty years, and his girlfriend called him constantly, demanding pictures to prove he was still at the game, to prove he was with his dad, and then kept calling and texting wanting to know if the game was over yet. There were a multitude of other stories, men checking their girlfriend’s phones every time they went out, women checking the history on their husband’s computers, and the list went on and on.

Having been on both ends of cheating, you just shook your head at the levels of insecurity and as harsh as it sounds, the stupidity. There are good looking people everywhere. If you don’t trust your partner not to cheat, no number of rules or limitations is going to fix that. As a matter of fact, depending on the personality of the partner, that might just push them over the edge. You can’t prove a negative. If one is constantly accused of cheating or having thoughts of cheating and then suffering consequences because of their partner’s insecurities, guess what? It might just become a self-fulfilling prophecy.

People cheat for a variety of reasons, most of them have little to do with their partner. During your research for your current work in progress, you spent a lot of time answering Craig’s List personal ads. You needed to know what made people tick, why they cheated, and what it is they were seeking. In every single instance, it had nothing to do with their spouse. One man was unhappy with the frequency at home, but upon further discussion, it became quite clear he did nothing to encourage those feelings within his wife. He expected her to want it because he did, even though she told him on multiple occasions what she needed. He didn’t want to put in the effort, so he looked elsewhere for something easy.

Another man you spoke with loved his wife. He made that abundantly clear, but what he loved more, was the chase. He loved the newness, the butterflies in the stomach, the anticipation, and his wife, for obvious reasons, could not give that to him. Talking with these men depressed the hell out of you. There is no cure for that level of selfishness, but you found relief knowing the site you used is notorious for attracting “that” crowd.

As you continued to listen to these people on the radio this morning, you just shook your head. Their insecurity said so much more about them than it did their partner. You wanted to call the radio station and tell these people to start doing things that made them feel good about themselves. Take a class, find a hobby, join a club, enrich their own lives until they got to a point they liked themselves enough not to worry about if someone would cheat on them.

We don’t have control over what someone else does, no matter how much we want to trick ourselves into believe we do. What we do have control over is what we do, how we feel, and how much self-esteem and confidence we can foster within ourself. You wanted to tell these people to start developing themselves into someone they’d never want to cheat on, because if someone did cheat on them, they would know it had nothing to do with who they are and everything to do with their partner.

Confidence is an aphrodisiac. Insecurity, not so much.

To read more of Elaina’s letters, click on Elaina!

This entry was posted in Elaina and tagged cheating, confidence, Insecurity, Jealousy, relationships. Bookmark the permalink.