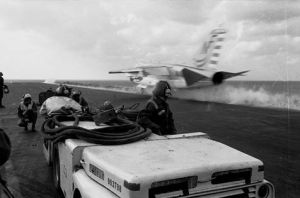 I wanted to write something pretty this week. Something ethereal. Pensive. Something from deep within about the beauty that surrounds me. To write it, and hold it close to my heart. But then, American Sniper hit the wide screen. Now, everybody wants to run out and shoot rag heads. It has become a national mania. American males are digging deep into our strategic reserves of testosterone, driving prices through the roof. Looks like Clint’s got another million dollar baby.

Being the old carrier sailor I am, it all brings back memories of Top Gun, the shit storm of nonsense it was, and the wannabes who hooked into it, believing themselves to be potential Sierra-Hotel Tom Cat drivers. The next Top Gun killers. Anytime Baby. Just sign on the dotted line, kick the tire, light the fire, shoot MIGs out of the skies six on six, get back to the ship, skivies flying in the wind, and catch a wire just in time for the first round of cocktails—shaken-not stirred. Cock proud. Easy peasy. War for the simple minded.

So, here we go again. “Nice to see a movie where the Arabs are portrayed for who they really are-vermin scum intent on destroying us.” Spoken by somebody who does not know his ass from his elbow, probably never served, and never heard the snap of a bullet as it passed by his ear. Somebody, maybe, who has never been outside the borders of this country, whose only experience of war is from the cushioned comfort of a theatre seat. All smoke and mirrors with nobody returning fire. Makes me think of Smedley Butler, a Marine Corps major general, who at the time of his death was the most decorated Marine in US history. He said, “War is a racket. It always has been.” Maybe movies are too, and so, movie makers. But what do I know, anyway. If I did, I would be a hell of a lot richer. Sour grapes for sure.

I do not plan to see American Sniper. Beyond this brief letter, I do not plan to comment further, because it is not worth anymore of my time, and because General Butler said all that needs be said. “War is a racket. Always has been.” Always will be. Hope next week I can steer my mind in a different direction, look at the positive side of human nature, write about my lust for painting, or family, or something else that matters. I am simply too old to get caught up in all this crap. Too old. Too tired. Too short of time.

This entry was posted in Uncategorized and tagged American Sniper, armchair heroes, glorifying war, Hollywood war, war is a racket. Bookmark the permalink.