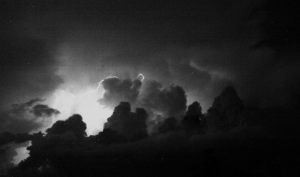 For years we hung around AA meetings listening to dry drunks blather on about all the cool stuff God wants for them. He is a magic critter with a magic wand who turns all the traffic lights green for them when they are late for work, and ensures a convenient parking place whenever they go out. They yammer on and on about these wonderful things, while you and I can only wonder how deep they have delved into the mystery that is Him. How can they possibly know what He wants for them?

Another thing that seems to make no sense: It has became a fashion statement for men to join an organization called Promise Keepers. They fill stadiums and listen to stuff they, as adults, should already know, then take an oath to be good. An oath to be good? Why is that necessary? It makes about as much sense as bumper stickers asking, “What would Jesus do?” So, what would Jesus do? I do not know. Do you?

Remember reading “The Sirens of Titan” by Kurt Vonnegut, Jr. In that novel, William Niles Rumfoord founded The Church of God The Utterly Indifferent. The two main teachings of that church were: “Puny man can do nothing at all to help or please God Almighty,” and, “Luck is not the hand of God.” If true, it makes nonsense of so much.

Maybe we live within a mystery, and our part is to delve deep as possible into it. To seek levels of awareness that permit us to love more fully. Is that what Jesus would do? No. I think it is what He did. It is the way He sought and found the depths of holiness, and perhaps the way we can find it in our own lives. It is possible life is nothing more than a set of Tinker Toys left behind for us to configure this way and that till we make sense of it.

Elaina wrote a letter about Christmas. It brought back a rush of childhood memories. We never had one. Dad’s booze came first. All else played second fiddle. Mom made efforts, but they were stymied by his insatiable need. At seventeen, we left home for the Navy. Lived most of our time on the other side of the world. Christmas meant a special meal cooked and served, but nothing more. Chapel services slid by, unnoticed. There were two unsuccessful marriages. Two children. A bleakness that surrounded us. You called it pragmatism. I knew otherwise. Life went on like that for decades. Finally, when you could borrow no deeper into loneliness, you reached out and found Sweet Grecy. We traveled to the Philippines. Spent Christmas with her. Went to a late night mass in a 400 year old church built during the Spanish occupation. The priest sang mass in Tagalog. It did not matter. We felt its overpowering spirit. Solace in the priest’s words healed the raw wound we had borne our entire life. How can sons-of-a-bitches like us deserve such a thing? Therein lies the mystery. The great beauty of the all and the everything.

This Christmas we will attend mass as a family with our daughter Samantha. And, albeit in Southern California, there is a nearby church where mass is sung in Tagalog. Even though we still do not understand all the words, the spirit will carry us.

For the rest, Bro, just call on me.