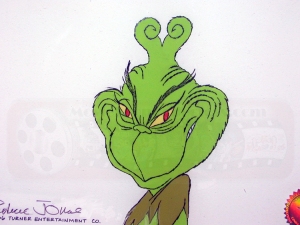 Oh boy. It’s the time of year that puts a curdle in your stomach and a sneer on your lips. Yeah, you know what I mean. The marathon of holidays has begun, and it doesn’t let up until sometime in mid-April. The front half is the worst: Hallowthanksmas. As the Grinch himself would say, “All the noise, noise, noise, noise!”

Your massive collection of holiday décor proves how organized and merry you once were, hauling up boxes filled with this theme or that, taking down one round of tchotchkes and installing another. You baked, made individually wrapped gifts, and sent care packages to all four corners of the nation. You wore costumes, played music, painted tiny plaster houses and lined them up on a shelf padded with faux snow. You displayed holiday cards and kept a spreadsheet of people’s addresses and names. Don’t forget those meals where you pulled out the stops. Numerous courses, numerous dishes. Your board groaned with the recipes you had researched for weeks. Nothing compared to that satisfied exhaustion after preparing another spectacular feast.

So . . . what happened? A perfect storm of things chipped away at your spirit.

What you once liked about holidays had to do with purity and fun, the uniqueness of a few days devoted to family cheer. The first blow came when holidays began to drag out beyond two or three weeks prior to their actual date. Commercialism and neighbors’ houses slathered in gaudy two-month displays stole all the charm. The second blow came when your family’s troubles erupted with great regularity at peak holiday moments. The comments someone always made about you martyring yourself ate at the remaining shreds of your enthusiasm. Eventually, you found yourself doing most of the work.

One by one, your rituals dropped to the side: the packages, the letters, the spectacular dishes. Your décor didn’t always get wrapped up so neatly before it went to the basement. You struggled to find gifts. You forgot key ingredients. Last minute panic ruled on holiday eves. The guillotine dropped when your family shattered. You spent Christmas Eve alone in a restaurant sitting at a table for one, choking down food that tasted like sawdust, wishing you had at least brought along a book. It was only the beginning—you’ve spent several holidays since equally alone.

So you’ve gone around shooting your mouth off for years about holidays sucking, but while expounding on this subject earlier this week you burst into tears. It felt different this time, and suddenly you knew: you missed a kid pretty badly who wasn’t coming home for Thanksgiving. You had expected him to, but now you wouldn’t see him at all until Christmas, and never in his life had you gone for more than a couple of weeks without him underfoot. You wept from your soul, because it’s one thing to know stuff happens in life and another to figure out a way to accept it.

Then you pulled yourself together and remembered you’ve got another kid who still loves holidays. Later that day you took that kid shopping, bought new décor, and let her talk you into planning what costume you should wear. You jammed the Grinch in a box and nailed down the lid, hoping it would hold. You’re not making grand promises, but maybe, just maybe, you’ll find a wisp of pure joy in this year’s annual slog through Hallowthanksmas. The Whos will thank you for it.