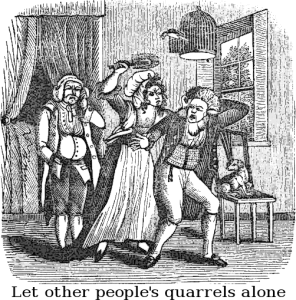 As I watch my country go to pieces, I’ve noted another worrisome shift: Americans, who were always a bit uneven in the practice of civility, have apparently abandoned it once and for all. This trend cuts across all demographics, regardless of age, race, religion, or politics.

Merriam-Webster Dictionary defines civility as polite, reasonable, and respectful behavior. It’s one of the first skills we teach our children.

Who among us really meant those apologies our parents forced from us? No one, of course, but it taught us that some things are better left unsaid or undone. This lesson had practical value. Bite your lip, count to ten, punch a pillow…we learned to do whatever it took to move through society without making a scene.

Personal control is the very essence of civility. People used to employ it in most of their dealings. The shield of civility enabled those who disliked each other or varied in opinions to interact without open strife. This is not to say that all grievances should be swallowed and never redressed. On the contrary, civility was our guide for deciding when the time had come to speak out. The Declaration of Independence is a fine example of “saying it like it is” . . . to the King of England, no less. The casting aside of politeness meant a line had been crossed. It signified the moment when parties had exhausted all other methods to settle a problem.

Indeed, civility itself could be used as a weapon. Polite words spoken just so might convey hatred, disgust, or extreme disrespect. The lack of speech altogether combined with a turn of the body worked effectively, too. Regardless of cutting tone and carriage, the words themselves were left to the recipient to interpret. Like the sweetly-spoken Southern phrase “bless your little heart,” if you didn’t know better, you’d find it sincere.

All that has changed in the course of the past decade. Several factors have combined to create a trifecta of extreme incivility: the rise of the internet, the rise of reality entertainment, and the rise of authoritarianism.

When I first began using the internet in the mid 1990s, most people were polite; we emailed formally, as if we were exchanging physical letters. My first encounter with internet humor involved a piece on the linguistic versatility of the S-word; I sent it to my dad, who went ballistic because he misunderstood that it was a joke. Soon, however, email became a pipeline for jokes, and for the next decade our inboxes burgeoned. The explosion of social media changed everything. It allowed for links and images to accompany thoughts. It allowed for easy repartée, which led to arguments, which led to epic flame wars. The civility that had once restrained us in public disappeared as new platforms for speech came along. The shield of civility had been replaced by the shield of cyberspace.

Reality entertainment began longer ago than most people think. In the 1980s, I wrote a college paper about TV game shows like Queen for a Day (1950s) The Newlywed Game (1970s) and The Love Connection (1980s), which encouraged contestants to reveal shocking personal details. Viewers felt superior to these flawed individuals; their pleasure came in knowing they would never stoop to such depths. But reality programs in those days barely dented the range of television entertainment. Then came the 2000s and the advent of shows like Survivor, The Apprentice, The Amazing Race, Big Brother, The Bachelor, Housewives, 19 Kids and Counting . . . the list goes on. America tuned in to watch people destroy their reputations and relationships, and we could not look away. We came to expect all entertainment to scandalize our senses. We wanted the blurred body parts and bleeped out bad words. If someone didn’t provide a decent sob story, they got sent packing, while the outspoken and outrageous won fortune and fame. We admired their antics, even as we swore we could never act like that; we let our kids watch and admire them, too. Acting out in the media became an acceptable way to court attention. To stay civil was to invite scorn, to be a “loser.” The paradigm had flipped from the early days of television, when the viewership reflected polite society.

Into this stew dropped the live televised human tragedy of September 11, 2001.

Fear wisped upward from that smoking pile in New York, carrying with it the remnants of American civility while igniting the minds of those who preferred a predictable world order. Layers of stressors—war, racial tension, advances in social justice—compounded the problem. This article details the current explosion of American authoritarian thought.

These multiple causes for social unease coupled with changes in how people interact have dulled the value of civility; we no longer try to curb our base feelings. We shout and accuse. We scorn the humble act of apology. We refuse to temper our feelings and to listen to others.

Without civility, we no longer practice politeness. We don’t respect our opponents; in fact, we’re quick to point out their flaws. We have no idea what it means to be reasonable, for that implies concession, and to concede is a weakness.

Now, when we exhort our children to apologize for some minor slight, we as a society are displaying hypocrisy of the highest degree. After all, we are the ones cutting cars off in traffic, screaming profanity at kids’ soccer games, and calling strangers “libtards” online. We have dropped the protective mask of civility, and I fear it may never grace us again.