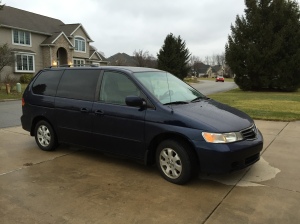 My Love Affair with Cars

The other day, my baby drove away with a man, and I will never see her again.

I should probably explain that better.

In this case, my baby is a beat-up, twelve year old cobalt blue minivan I traded in, along with a sedan of no consequence, for a car that will hopefully become my new baby. Yes, I’m one of those people who really loves cars. I become so attached that I grow emotional when their time with me ends. My first car was the 1978 Volvo 244 I learned how to drive in. Dad sold it to me for a dollar before my last year of college. Its final years were tortured and arthritic, thanks to two massive accidents it had endured before me, but I loved that old car. I cried actual tears the day I pushed its keys across the desk of a Honda dealer.

My next car, the silver 1989 Civic with manual transmission, was a rugged little champion. We’d had it less than a month before heading cross country for a work-related summer in Denver. Early on, it achieved a staggering 44 mpg, even on steep slopes. We went off-roading every weekend, pushing that little sedan up logging roads 12,000 feet high in the Rockies. It never broke down, never had an accident. It crossed the nation twice and rode twice in the back of huge moving vans. In Portland, Oregon, it suffered the repeated indignity of petty break-ins, but it was never stolen. We sold it in Illinois because our family had grown. I’d already stopped driving it in favor of a more practical car.

My third baby, the forest green 1995 Subaru wagon, entered my life just weeks before I gave birth to my second child. That car served us well in the Pacific Northwest. It hauled our human babies and untold quantities of cargo up mountains, to beaches and rivers, skimming icy roads with the ease of a sleigh. It proved itself worthy when we moved to Illinois; in the winter of 1998, we strapped a toboggan to its roof and went out in a blizzard. I figured I’d drive my Subaru into the ground.

But then I went and had another kid.

With two preadolescent boys and an infant on the way, I knew we could never cram all three offspring into the Subaru. Sorrowfully, I sold it and purchased a 2004 Honda Odyssey van. I bought it on a Monday and had the baby on Friday. My daughter and I moved in right away. She not only came home from the hospital in that van, she spent a good chunk of her early years inside it. While her brothers played baseball and took guitar lessons, I nursed her in the back seat. We took road trips to Minnesota, North Dakota, Georgia, Virginia, and Washington, D.C. The minivan bore witness to our family’s emotional highs and lows. I laughed in it, argued and screamed in it, and sobbed my heart out a few times. I drove a jubilant team of teenaged filmmakers to a festival in Indianapolis, and brought them home late that night, broken and angry.

The Odyssey kept us safe the times we got lost. It endured curbs, potholes, and concrete parking bars. Twice it buried itself in a snowbank and proved too heavy to push out, but most of the time it barreled through drifts like a WWII tank. With the rear seat folded down, it hauled flat screen TVs, lawnmowers, snowblowers, dressers, bicycles, golf clubs, gravel, topsoil, and shrubs. The minivan escorted my boys and their stuff back and forth to high school and college.

As the Odyssey aged, it began to get lousy mileage, though the engine still purred like a kitten. Faced with a regular 100 mile commute from Indiana to Chicago, I acquired a 2011 Hyundai and shared both cars with the boys. Then one day the boys weren’t around anymore. The oldest moved out to the West Coast, and the middle kid loves college life in the East.

And so, with sadness again weighing my heart, I struck a deal for a moss green 2016 Subaru wagon and gave up the other two, one of which was the best car I’d ever owned in my life. If it could speak, my Odyssey van would tell stories. I was the adventurer and captain of that ship, and my kids were the crew on our twelve year long journey. But all good things end, and so was the case when I handed over its keys. Tears smarted my eyes as the man from the dealership climbed into the Odyssey, fired it up, and drove my baby forever out of my life.

This entry was posted in Colleen and tagged adventures, cars, changes, family life, the journey of life. Bookmark the permalink.