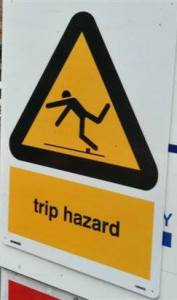 Tripping in My Sleep

The brain is a wild and mysterious thing. Yesterday morning as I struggled to wake up, I lay in that quasi sleep state where you know you’re sleeping and dreaming, but you’re also aware of your surroundings. In my dream, I walked down the road and while looking at a set of old tires, I tripped in a pothole. I woke up with a start and immediately felt betrayed. My mind created a pothole without my knowledge…and then let me trip in it.

This irritated me more than it surprised me. My brain has long been great at keeping secrets from me. In its defense, it hid abuse, molestation, and a myriad of other things so I could survive and function, but the sense of betrayal when I remembered wasn’t lessened because of the kindness. The resurfacing of memories was like stumbling into a room where the keys I’d been missing sat on a table, in plain sight. As soon as they came into view, I knew I’d walked by them hundreds of times without registering what they were. Each memory had that same effect. It had always been there, I’d known it, it just hadn’t registered, until it did. Remembering hurt worse than knowing.

I climbed out of bed, pissed off, determined not to let tripping in my sleep trigger memories I didn’t want to have. I pushed the uncomfortable thoughts out of my head and got ready for work. I tried distracting myself with music and then meditation, but the sense of tripping, the sense of knowing I should know something, stayed with me.

It was the Tuesday after Christmas. I worried my store would be dead and I’d have nothing to keep me busy and I’d dwell on my brain’s betrayal, but the store had a steady stream of customers and it wasn’t long before the sense of unease left. It was early afternoon when a sizable lull occurred, and I was grateful for the sound of my phone ringing. Caller ID identified my daughter’s number and I answered with a smile in my voice.

Through sobs and whimpers, she told me her grandfather had been killed that morning by a snow plow. It was a freak accident. She didn’t have all the details, but the details didn’t matter. It’s been nearly two decades since I called him my father-in-law, but in that second, time evaporated. The man I had called dad for years was dead and my heart broke. I couldn’t begin to imagine the pain her grandmother was going through, losing her spouse of over 50 years. A man, who at 80, had been healthy as a horse and had years of life still to live, now lay dead in his own driveway.

The muscles in my neck tightened as I tried to suppress my grief. My nostrils flared and an elephant sat on my chest. Grief oozed from my eyes and I wailed. In the blink of an eye. An ordinary day. Gone. The senselessness of the tragedy hits me in waves, and I stumble every time I think of their pain.

Last night when I went to bed, I prayed for their reprieve, if only for a moment. I hoped they could find a way to ease the pain, soothe the bewilderment, and mend the holes in their hearts. I almost prayed they could go to sleep and forget for a moment, but then worried they too might trip in their sleep. Remembering is so much worse than knowing.