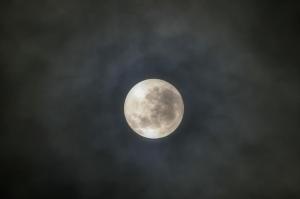 Sometimes I forget to stop and just be. Be alive. Be alone. Be moved by the beauty of a perfect moment. Tonight there was a full moon. I don’t think I’ve seen a full moon that didn’t capture my attention at least for a moment, but it’s been a long time since I took the time to just stop and bask in its perfect light.

Let’s back up. Saturday is soccer day in the Chamberlin household. Three kids from 7 to 17 with most of them with a game on Saturday. While at middle child’s game, youngest comes to tell me that his ball rolled into the drainage pipe behind the bleachers. This happened last year, and I was able to get it out but the evening sun was very bright today as it sought the horizon. Even with the flashlight on my phone, I just couldn’t see the ball in the fifty foot, twelve inch wide pipe, so I decided to come back after dark.

Oldest child decided he would go with me on this little adventure. As we walked around the high school soccer field about 11 p.m., we both had to stop and marvel as the wonder of the night. He’s been going through a lot of things lately, mostly of his own making, and it was just one of those cool moments when we felt like we were on the same page for a change. The ball rescue was a success, thanks to the telescoping handle of our light bulb changer, so double good on that.

When we got home, I decided to go back out and just enjoy the night. Well, that’s not totally true. I forgot to mention the neighborhood skunk. ‘Bout once a week, we start smelling it. It seeps into the house and won’t go away. By the time oldest child and I came home, the outside air was clear, so I put a big fan in the doorway and it made sense to sit outside in case inside cat and/or inside dog, or even outside dog, decided to breach the open door. But, there was the moon again. The fog was thicker than earlier and I watched it spill across the moon like it was trying to wash it from the sky. Again, an almost perfect moment.

It was made truly perfect after I went back in to get my guitar. So, there I sat on the front step in a t-shirt and cut off sweats, barefoot, bathed in moonlight and the melodies of my heart that poured out my fingertips. I started thinking about songs I could still teach oldest child, who picked up the guitar about a year ago, and I found myself playing a song my late guitar teacher taught me. I remember sitting in his downstairs studio that always smelled of thick pipe tobacco as he taught me what he simply titled “Prelude in A Minor.” It’s a haunting melody that has always spoken to my soul in whispers of sadness, like a once beautiful house long abandoned to mildew and the slow rot of time, where memories echo in solitude. I respected Steve a great deal and I found myself wondering what he would think of the man I am. He would probably point out the obvious, that I could have done a bit more to support my family this year. Then, he would look me in the eye and say something that made me feel okay.

These all sound like sad things, I know, but sometimes the heart needs to take out its sadness, examine it, then put it back where it sits cool and familiar, nestled against the warmth of its joy. I have a lot to be stressed about. I haven’t worked for most of 2015 and my wife has carried all the weight, or tried. Things are tight in the Chamberlin household, and we’ve only barely managed to keep all the plates spinning. It’s moments like tonight that remind me of all I have, how far we’ve come, and that there is light at the end of the tunnel. It’s not the rejuvenating glow of the pale full moon. It’s not as sure and pure and tangible, but I see it still.

This entry was posted in GuestPost and tagged being in the moment, examining feelings, grace, joy, sadness. Bookmark the permalink.