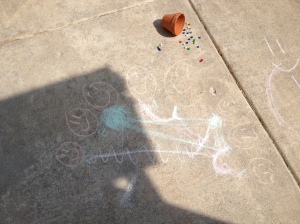 She saunters down the street, all legs, slicked in sunscreen, her fifth grade class’ tie-dye t-shirt snugged in a neat knot on her small but blossoming hip. It’s Field Day today, and next week only two days remain of her grammar school years. She looks very happy. On top of the world. So excited, she woke at 5:30 am and got herself ready.

From a child’s perspective, it’s only the beginning of those tumultuous years when friendships burgeon and fizzle, when schoolwork and activities become much more serious, when you feel the first jolts of interest in the opposite sex.

From a parent’s perspective it is a marvelous age. I’ve always enjoyed my kids’ middle school years. As parents, we have our individual strengths and weaknesses; I was never as engaged in my children’s affairs until they became more conversant. Nothing gives me more pleasure than to listen to a kid reveal her newfound powers of observation and knowledge. Sure, babies are fascinating—I could watch them all day as they sleep or absorb the world around them—but I love even better that phase when a young mind begins to grasp the multiple layers of human existence.

We had a good afternoon yesterday, the eleven year old and I. She queued up a movie about four eleven year old girls in the summer between elementary school and middle school. Each of them dealt with some setback or loss, and they supported each other through their various trials. At the end, they acknowledged they might never again be so close, so they took pictures to record this moment in time, the moment between girlhood and young womanhood. The movie contained nuances that might go over the heads of typical fifth graders; I wondered who the target audience was. Then my daughter began to point out those various nuances, how the adult characters were reacting to personal stress, why they reacted that way, and how their behaviors affected everyone else. As I listened with amazement, she added that she didn’t think most of her classmates would understand the more complex themes of this movie. Maybe, maybe not. Fifth graders are truly interesting creatures: astonishingly mature brains trapped in bite-sized bodies.

The movie got her to thinking. We worked on a craft together, then made dinner and ate outside. After a few bites, she raced to the garage to snag her bucket of sidewalk chalk, and then she outlined the complexities of her friendships right there on the patio in pink chalk. Her project struck me as weirdly symbolic: relationships drawn in dusty rose-colored lines, easily washed away.

Her eight friends, so entwined at the beginning of fifth grade that they drew pages and pages of themselves as superheroes, had begun to fragment. Emily spent more time with Kara and Susie. Two months ago, Mollie had caused an upheaval so vast that all seven of the others had ended up in the principal’s office—only Laura spoke to her anymore. My girl used to be besties with Abby but now she hung out with Olivia. She predicted this dynamic would continue in middle school, since she and Olivia would likely end up in the same learning track. Between the eight pink smiley faces grinning up from the concrete lay a network of lines, some crossed out, some thickened. Abby had become mean. Susie’s interests had diverged from everyone else’s. Emily liked a boy who liked Olivia instead.

“Who’s the leader of this bunch, anyway?” I asked.

She scrunched up her face. “They all say it’s me.”

I was not surprised. She understands them best. I dared not tell her that the dark side of perspicuity is you get dragged down into all the drama. She knows it already: that infamous visit to the principal’s office.

But to be eleven again! When your legs are growing before anything else, when you’re still not quite graceful but your heart is so tender you burst into tears at the slightest offense. When the hormones have still not taken your soul hostage. When the burns of life don’t yet fill you with despair. When you can still curl your body against that of your mother after a nightmare rocks you awake. When you’re just tough enough to stay home alone for an hour.

To be eleven again! That age of innocence combined with a great thirst for knowledge. The whole world’s at your feet when you are eleven, so fleeting, so glorious, so many bright chalk marks on your mom’s patio.

This entry was posted in Colleen and tagged children, love, motherhood, parenting, pre-adolescence. Bookmark the permalink.