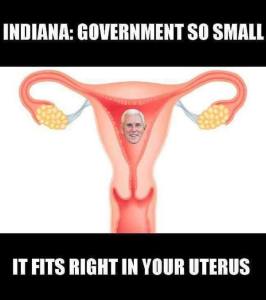 For the past three weeks, I’ve been seeing red, and I don’t just mean that I’m angry. I am talking about a grassroots organization I’ve joined called Periods for Pence, which appeared out of nowhere during the last week of March and today has nearly 50,000 followers. P4P was created by an anonymous Hoosier woman to protest the passage of a bill called HEA 1337, which sneaked through the Indiana legislature and was signed into law by Governor Mike Pence.

Specifically, this law—which goes into effect July 1st—addresses a veritable laundry list of issues surrounding women’s reproductive rights, and it is so sweeping and punitive that even hard-core pro-life Republicans in Indiana are fuming. According to Indiana Rep. Sharon Negele – R, “The bill does nothing to save innocent lives. There’s no education, there’s no funding. It’s just penalties.” Indeed, HEA 1337 hits on far too many reproductive issues to address in one essay. That’s not why I’m here. I know better than to debate the morals and rights of abortion; people feel too strongly about the subject. No, I’m here to celebrate Periods for Pence, which highlights the ridiculousness of commingling religion and reproductive legislation.

The founder of P4P has tapped into one aspect of HEA 1337 that technically has nothing to do with abortion. She noted the law requires any miscarriage, no matter how early, must be retained and classified as human remains, and either buried or cremated in a proper facility. Even the law’s authors have admitted this would create a financial burden on medical facilities and ultimately their patients, never mind the logistical and emotional toll for a woman having to collect and dispose of spontaneous miscarriages. Outraged by the full scope of the law but focusing on this element, P4P’s founder set out to lampoon one of the worst pieces of reproductive legislation in America, using the signatory governor as its namesake and scapegoat.

The Facebook page for Periods for Pence is part high entertainment and part serious drama. Some threads follow paths of absurdity. Members speculate about mailing the statehouse evidence of their successful flows for the month, or recount the phone calls they have made asking Pence’s secretary advice about feminine hygiene, sex, and ejaculations. Other threads contain poignant stories from women who have lost pregnancies or been forced to carry dying fetuses to term. Only a few trolls have invaded the page, but when they do, most members address them with calm dignity. Last week, P4P supporters descended on the statehouse to protest the bill. The group has attracted national attention from a range of news outlets.

Some naysayers dismiss the movement as juvenile behavior and assume the group’s focus is all on abortion. They couldn’t be more wrong. Periods for Pence is about reclaiming the bodily rights of 50% of Indiana’s population. It’s about middle aged men and religious extremists dictating women’s personal lives. It’s about the absurdity and arrogance of people who didn’t bother to consult medical professionals when wording sensitive legislation. If they had, they would’ve learned that 10-20% of all pregnancies end in miscarriage, and more than 80% of miscarriages end before 12 weeks. Between 50-70% of all miscarriages occur due to chromosomal abnormality; in this case, the woman’s body really does know how to take care of such things.

I feel passionate about this cause, and not just because I’m a woman, a liberal, and an avowed atheist. I joined this cause because I, too, have experienced miscarriage . . . three of them, in fact. Two occurred around 8 weeks, but one undeveloped 11 week pregnancy began violently and ended with a medical procedure called D & C … an abortion. According to the doctor, the ball of featureless cells in my uterus might have continued there for an undefined length of time, growing ever more dangerous. I was alone when the miscarriage commenced, leaving me ravaged, exhausted, and traumatized. I blamed myself for killing two “babies” in a row. But HEA 1337 demands that I should have collected the tissue my body was expelling and delivered it to a facility for burial.

Picture 20% of all 2-3 month pregnant women crouched over a toilet with a Ziploc baggie and a slotted spoon. Dislike the grotesque imagery? That’s exactly what Periods for Pence aims to bring to the attention of Indiana’s paternalistic legislators, who passed HEA 1337 in great haste, 60 votes to 40. Governor Mike Pence signed it with the alacrity of an enthusiastic preacher.

In the weeks since, 50,000 activists from around the nation and elsewhere have been phoning and emailing the offices of Pence and the law’s authors. Through the Freedom of Information Act, they’ve filed for transcripts of the thousands of said phone calls and emails. They have gathered in Indy to protest. And at a baseball game this week, fans roundly booed the governor.

Periods for Pence is a marvelous example of what makes America so great. When our citizens see red, they rally for justice. I’m proud to be part of this collective outcry, regardless of its outcome. Women and men everywhere should stand on alert in case similar bills go into effect in their states, and in the meantime, join us, won’t you? See red and scream bloody murder for reproductive rights; you don’t have to be a Hoosier or even a female. I’ve got the details below.