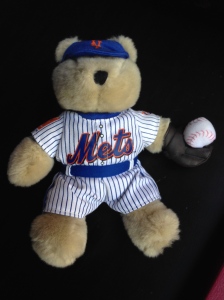 The last time I paid attention to a baseball playoff, my nine-year-old daughter still needed a Bumbo to sit upright. It was Game 7 of the 2006 National League Championships, and the Mets’ Carlos Beltran stood at the plate in the bottom of the ninth with two strikes, the bases loaded, and the Cardinals up 3 to 1. This is the stuff baseball legends are made of: a batter who could win a championship with walk-off grand slam home run; a pitcher who might do the same with a final strike. Triumph and ignominy loomed. As my husband stood beside me, rocking from foot to foot, blood heated my face, my heart pounded and I felt like my head might explode. I needed to sit down but couldn’t. Adam Wainwright’s final pitch took flight. Carlos Beltran watched it zip into the catcher’s mitt; he didn’t even twitch his bat. Ignominy it was.

The lamentations could be heard throughout the land (or at least our apartment building), and the summertime mood in this household has been pretty sullen ever since. My husband has watched the Mets religiously since he was our daughter’s age and the Miracle Mets won the ’69 World Series. Thirty-four years later he’s enjoying another rare taste of victory (assuming the Cubs, baseball’s other perennial underdogs and Back to the Future–predicted champions, don’t win Game 4 of the NLCS tonight). My daughter and I are enjoying the rare sight of a dad who smiles during games. And the whoops that echo through the hallway whenever Daniel Murphy swings at a fastball—those delight the ear.

I’m a sports fan by proxy rather than general inclination. When I was a girl, I rooted for the Denver Broncos because that was my dad’s team. Every autumn weekend, Dad had the game on in the basement with a bottle of Cheez Whiz and a bowl of Ritz crackers on the table. I consumed enough orange during those years that I still consider the Broncos “my team,” though now I couldn’t tell you so much as their current win-loss record.

Were I not married to my husband, I’m sure the same would be true of the Mets. I always root for the underdog, but I’m a naturalized fan of the Amazins, via marriage. The road to both the wedding and fanatacism had a rocky start. In 1999 on our first vacation together, we were driving along a pitch-dark, narrow, winding road in Hawaii, listening to Kenny Rogers walk in the Braves’ winning run during the final Game 6 of the NLCS. After a minute of oppressive silence, I chirped, “There’s always next year,” and for the first time witnessed my husband’s temper. Lesson learned: don’t ever try to tell a sports fan to cheer up, when the pain of losing is still raw. However, my husband’s ardent love for his Metsies is, I think, a reason I love him so ardently. A lifetime commitment to a losing team says, here’s a person who’ll stay loyal, no matter what. I’m sure that feeling is why, when my husband proposed to me during a rain delay of a Mets game—which we had to watch before going out to dinner for my birthday—I said yes.

This entry was posted in Amanda and tagged baseball, fans, memories, sports. Bookmark the permalink.