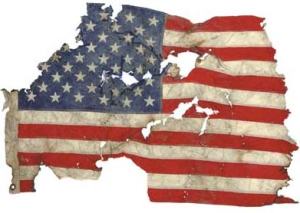 I hate to say it, but the terrorists won.

Fourteen years after we watched the towers come down, we are a nation that now lives with the constant specter of fear, hate, suspicion, and divisiveness.

And we let them do this to us.

This generation—those of us who were then in our 20s through 40s—was handed our Pearl Harbor, our chance to become the next Greatest Generation, and we screwed it up. Pretty sad, if you think about it.

For a while it looked promising. We rallied to save the survivors and mourners, raced to comb through the wreckage, raised money, spoke with outrage, waved flags, and sang patriotic songs in quavering voices. God, it was horrible and good all at once. I had not yet been born when Kennedy died, and I was too young to comprehend the murder of Martin Luther King, Jr. I lived through the destruction of Challenger, but that event didn’t inspire people to change their whole outlooks. September 11, 2001 became the pivotal point in my generation’s future. No one wants to experience trauma on this scale, but one hopes that something good might come of it.

Yet fourteen years on, what have we got? More than 6,800 American service personnel are dead, with another 52,000 wounded; 320,000 have suffered traumatic brain injuries, and some 400,000 now live with the effects of PTSD. Add in the losses for coalition troops and the first figure rises to over 8,000. This doesn’t even account for the more than 210,000 Middle Eastern civilians who have thus far lost their lives in the resultant armed conflict, which continues to rage with no end in sight. By comparison, Pearl Harbor ignited a unified movement that helped end World War II inside of four years.

And that’s the key word: unification. In the immediate aftermath of September 11, we all wanted to rush out and crush Osama bin Laden. We Americans were so pissed, we would have walked through hot lead to bring that scumbag to justice. We were unified, by God, and into that toxic brew was dumped a boatload of lies, sucking us into war against the wrong enemy. A war that killed thousands and estranged untold millions. We trained a culture to hate our damn guts, and since then we’ve been reaping the fruits of our labors.

From that fruit we made a vile Kool-aid and fed it to our children. The indoctrination might as well have been ripped from a North Korean handbook: “They hate us and want to kill us. They are godless, uncultured, and trained from birth to destroy us. The enemy moves like a shadow among us.”

Over time, this evil brew has fermented, causing Americans to grow paranoid and turn on each other. Its effects have amplified our inherent flaws, blooming into a deepened and quite vocal hatred of people who don’t look like us, exploding into words of condemnation toward those who hold other faiths. We’ve grown more certain that the End Times are upon us, that Someone is poised to overthrow our government. To protect the American Way of Life, we’ve armed ourselves to the teeth while lobbing accusations of cowardice at all who counsel moderation. We blame everyone and everything except ourselves for our fear. We live in a constant state of alarm, with weapons jammed in our belts and eyes swiveling to identify the next wannabe terrorist.

It feels like the McCarthy era all over again.

September 11th has been a catalyst, indeed, but not in a way that has brought out America’s best qualities. We howl for revenge, and not finding enough of it to satisfy our thirst, we point fingers or take pot shots at brown-skinned citizens, fling biblical threats at anyone whose lifestyle differs from ours, and pray for a return to the good old days, when men were men and women were chattel.

How is this any different from our alleged enemies? They live with daily violence in a so-called “backward” theocracy. We live with daily violence and must argue with factions that hope to restore our nation to its so-called Christian roots. They hate the minorities living within their borders; so do we. They hate the nations adjacent to theirs; so do we. Above all they hate us, and of course the feeling is mutual.

In short, we have become THEM.

I doubt they planned it this way, though I suspect their leaders rejoice. “Look at those Americans—such hypocrites, shooting and hating each other. They purport to be the world’s moral compass, the savior of the needy, yet they are no better than dogs fighting over scraps in the street.”

That’s what happens when you drink from the cup of Fear for so long. For so very long. Fourteen years I have watched this once great nation lose its way in the fog. It started with an event that might have brought us together, an event that seared itself into our souls, but we didn’t heed President Roosevelt’s iconic words. We let our fear take control. We let the lies corrupt our inherent geniality and reason. We let the terrorists turn us into a nation of hate, and it seems our generation cannot correct this grim path.

And, like the four planes that went down on that sunny morning fourteen years ago, we have terrorists at the helm, paranoid ones born from our own soil, and I’m not certain how we can pull out of this dive.

This entry was posted in Colleen and tagged 9/11, fear, hate, paranoia, September 11, terrorists. Bookmark the permalink.