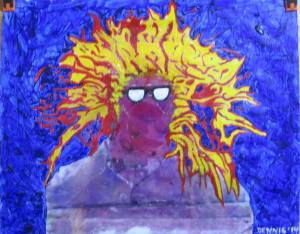 My Life As an Itinerant Chicken Sexer

My board of directors met today and roundly criticized all I had ever done, and all I ever plan to do. Just before adjourning for brandy and cigars, each assured me in his own way that all that was said, was said for my own good. As they departed one by one, I sat wondering how many earned a living, residing here in this dark, nebulous hall, because as each board member departed, he was instantly replaced by a lobbyist, smelling of caviar and telling me how to turn every situation for the better, the small price being my absolute and utter loyalty to that particular individual, and unlimited caviar privileges. So the day goes, with a half dozen or so slobbery, yammering fucks, directing nonexistent traffic in my noodle. A thought disorder I carry from early childhood.

I lived my past life a step or two ahead of The Four Horsemen of the Apocalypse. Sleepless nights of board meetings, of constantly waiting for the other shoe to drop. For much of it, booze oiled my bearings and kept me ahead of the game, but eventually it lost its punch, and I got clobbered. Seems just a day or so ago, but more than three decades have passed since the Great Clobbering, and I have not touched a drop. Now, even the smell of it repels me. Funny, because it was not supposed to happen that way. But then—neither was Sweet Grecy, nor the many other happy events that have befallen me. Anybody taking bets on my future life way back then, at the start of things, would have lost their skivvies.

Sweet Grecy tells me I think too much. Is that what it is? Thinking too much? Beyond knowing that is a verb—to think—and verbs imply action, I do not really understand what that means—to think too much. Is it like now, for example, as I sit in my dyslexic way, banging out this frustrating letter, with one voice saying do this, another saying do that, and a third saying, “Fuck it altogether,” turning my brain into a piñata to make their point? It is funny in a way, because so long ago the humorless folks in 4 West, the Alcohol Recovery Ward, just above 3 West, the loony bin at Naval Hospital Long Beach, told me much the same thing, i.e., that I think too much. Part of my Dis-ease, perhaps.

I eventually escaped that ward. Climbed the suicide fence, dead of night, scrambled home on my hot-shit motorcycle. Actually, they cut me loose with a kiss on the forehead and a “go forth and multiply,” so I finished my time in the service, for which the bank of my choice receives a fat monthly stipend at the expense of y’all, and I can spend my remaining years riding hot-shit bikes, punching keyboards, and slopping acrylic paint on whatever is within reach. Pretty amazing state of being, thoughts be damned.

Gus, the old punchy pug with a bent nose and split eyebrows—first person I met in AA after the Great Escape, who at first I took for a desperate old queer on the make, understood my thinking situation well, and knew I knew he understood. Once I figured out his purpose, I stayed close at hand, sitting at his feet with others, camped out at the flophouse named Lemon Tree Hotel that sat off the boulevard, behind pawn shops, in the single ill-furnished room he called his Spiritual Saloon, while he yacked a million yards of stuff we all needed to know just to get by in this world. Learned he was once a rich man who had nothing, and now he was poor and had everything. When he passed, the group of us who loved him so well passed the hat to buy him a respectable coffin and marker, because it was all we could do to make things go round and round.

Memory of him is a teary thought for me, as it is, I suspect, for some others. Maybe, after all, thoughts, in and of themselves, are not such bad things when focused on the right things, things it would be a shame to lose. Like thoughts on loves that have passed through our lives, and those still hanging around. Yeah, when I think about it, that does not seem to be such a bad thing. I will ask Sweet Grecy about it. She is sure to know.

This entry was posted in Sig and tagged alcoholism, dyslexia, frustration, survival, thinking too much, thoughts. Bookmark the permalink.