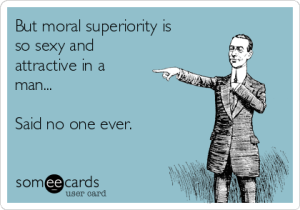 The Christian Thing to Do

There are few phrases I find more irritating than “it’s the Christian thing to do.”

A person has a lot of nerve stating aloud that they’ve decided to do something because it counts as brownie points toward their faith. Nothing could be more smug than to imply an action done in the name of Christ carries higher value than the same action carried out by a nonbeliever.

Let us say a disaster occurred and displaced people needed help obtaining food, shelter, and clothing. Would the blankets and bottled water given by those of other faiths, or those of no faith, please God less than supplies given by Christians? Are all non-Christians so soulless that their offer of aid contaminates the recipients?

Obviously not, so why carve a distinction by stating that your belief impels you to offer superior assistance? Why light the spark of divisiveness among people?

In this age of the Global Village, where I can speak live to a person on any continent in the world, I cannot comprehend the increasing pushback among persons of faith. If your faith is so fragile that you fear losing members to other sects, or worse, to godlessness, then your problem does not come from the outside, it comes from within. Rather than fostering a mindset of Us versus Them, why not find a way to embrace and interact with your fellows in faith? A system is strongest when it’s built of firm yet flexible material. Rigidity shatters under the force of pressure.

Rigidity in religion comes from inflexible thought, from hatred and intolerance of others, from isolating a clique to protect it from others, and from modeling the idea that one’s clique makes better choices than everyone else’s. The phrases “it’s the Christian thing to do” or “as a Christian I feel that….” stem directly from that mindset. As a nonbeliever of all religions, I find it offensive that anyone would presume me immoral, all because I don’t happen to belong to a clique.

Thanks to technology, this world will only grow smaller and smaller; you simply can’t fight it. Well, you can by insisting on singling yourself out with smugness, but that won’t generate much goodwill toward the rest of the planet. Christianity as a whole constitutes only a third of the entire world’s various belief systems. It’s pretty arrogant, if you ask me, to assert your god is the only true god and 5 billion other people have got it all wrong.
Most of the time, I couldn’t care less what other people believe. It’s none of my business, but it’s equally none of their business to presume things about me while rubbing my nose in their superiority. Perhaps I’ll go to hell, or perhaps I’ll just die. That’s my problem, not yours.

In the meantime, when confronted with moments where I might lend others a hand, I will say loudly and proudly, “It was the humane thing to do.”

This entry was posted in Colleen and tagged arrogance, beliefs, Christianity, divisiveness, doing the right thing, superiority. Bookmark the permalink.